Seth Rogen and company have-to this point-made a career of starring in comedies that play on the absurdities of interaction in typical scenarios of the contemporary twentysomething lifestyle and, from how it was advertised, Observe and Report appeared to follow suit. Watching the film tells a different story. The ambition and audacity of first time writer/director Jody Hill went unforeseen by most and many of the picture's "punch lines" evoke sadness and even disgust more so than laughter and, through this, the movie succeeds as a "how to" template in making audiences chuckle uncomfortably. The thing is audiences don't like being unnerved, let alone morally challenged, in a public auditorium. Observe and Report performed poorly, grossing $24 million on a high of 2,727 screens. 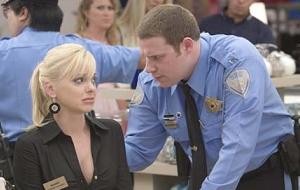 This is not a film I would call light-hearted. Calling it the opposite wouldn't feel right either, for "heavy-hearted" seems like a descriptor more suited to tragedy than comedy, no matter how subversive its approach may be. If I had to settle on a label, it would be something along the lines of heavy-minded (or simply "weighty"), for the film's humor is dependent on first understanding its lead in a culturally relative sense. The protagonist is Ronnie Barnhardt (Rogen), a mall security guard-strike that-a mall security chief whose ability to perform his job is less impressive than his inability to converse civilly. Raised by television and an alcoholic mother (apparently in that order), Ronnie grew up to be a blunt, indignant presence, blissfully ignorant of most social norms to the point of being sociopathic. This is not to say he is a bad person, but one who grew up without reason to learn the tenets of interaction. Hill suggests our perception of morality is relative to our experiences; Ronnie being a man of limited social experience has thusly limited his perception of reality. Still, his heart is a big one. He cares for his boozehound mom without prejudice and loves her as a son, but lacks the number of other social ties a grown man should have. Because Ronnie can't distribute his unstable passion amongst friends, family members and associates he places a premium on his job and views the mall with an unknowing air of sanctimony.

The narrative is propelled by Ronnie's personal and professional pursuits, which, unbeknownst to him, are really one in the same. After a flasher wreaks havoc in his mall's parking lot, Ronnie prioritizes the man's capture, even threatening to, "F---ing murder" him on a local news show. His behavior in this instance is largely indicative of his inability to infer context. While others would see this display of unprovoked profanity as a breach of social etiquette, he views it as posturing. Similarly, he later commits battery, verbally assaults a minority, and date rapes a colleague, though in his eyes he was merely protecting the mall, interrogating a possible suspect, and making love to the woman of his dreams, respectively (Freud would have a field day with the last one). Hill doesn't go so far as to suggest that Ronnie is right by his actions, but that his moral disillusionment is to blame, which, in many ways, is sad.

Before viewing Observe and Report I had read that it tempts to channel Taxi Driver and watching the film only confirmed this. Though more flared aesthetically, Hill's movie even has the same ambiguously fantastical ending as Scorsese's. Still, unlike Marty, Hill fails to relevantly link his lead's condition to any real social situation (aside from a poor home life), instead making him inexplicably detached from reality. While I admire the picture's rhythmic stylization and sociological conscience, it lacks the necessary ingredients to make a good comedy a great one.

No comments were posted.